A monarch of music, UK based singer/songwriter, Hazell Dean, has been the reigning Queen of HiNRG since the early ’80s. On February 21st, 2019, Ms. Dean plans to unleash the double single HEAVENLY/Because the Night upon the world. Since 2012, Hazell has released three albums, eleven singles, and a greatest hits compilation through the independent label, Energise Records. Of these, several have been hits on dance, pop, and vocal charts worldwide. But H/BtN is the much publicized last single with Energise for Dean who is now in semi-retirement. It’s no secret I’ve been a Hazell Dean fan since I was young. If you read my last post you’ll know how I became involved in the HEAVENLY project. Well, being the cover artist for Ms. Dean has many perks, one of which was an early listen to both songs and their various remixes!

How do I describe these six new tracks without spoiling too much? ENERGETIC! POWERFUL! HYPNOTIC! Those would be the first three words that came to mind as I played the set. Hazell and long-time producer Pete Ware understand the strength of her voice. I am absolutely obsessed with any song that has Hazell belt out a tune, she has such a strong vocal range. Hazell Dean is indeed the sonic siren superhero I depicted for the single’s artwork. Because the Night has three remixes, two by pop-stastic producer, Matt Pop, and a third by the Dean/Ware team. Adept at taking a well-known song and making it her own, Hazell has transformed the famous Patti Smith 1978 tune and brought it to the modern age without losing its lyrical impact. BtN is just … so … cool. It has the hard edge of the original rock version, but adds the electronic tinge that has influenced Dean’s sound the last few years. Because the Night easily gets stuck in your head and be prepared to sing and hum the song most of the day.

Of the two songs, I was most looking forward to listening to HEAVENLY, an original track by Dean/Ware. This too has three separate versions, two by Matt Pop, and a Dean/Ware “Angelic Mix”. It immediately became one of my new favorite Hazell Dean songs. It’s one part pop, two parts disco, and totally HiNRG! Heavenly begins with Hazell singing, “Heavenly, heavenly, heavenly …”, over and over as the music begins to ramp up. Hazell’s voice can also be heard swaying in divine cords far off in the distance and then —  BAM! The song begins, an unapologetic dance floor smash. I’m torn between which mix I prefer, the Angelic or Matt Pop’s “Celestial Mix”. They’re both excellent. The Angelic mix could have easily continued beyond its 6:14 mark and the Celestial runs nearly eight minutes long, my typical preference for a remix of any song I enjoy. 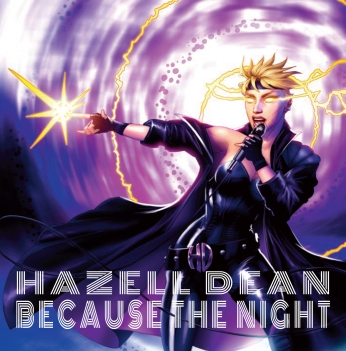 Because the Night (preview)

If this were to be the last Hazell Dean single ever, we the fans would feel blessed. Heavenly/Because the Night proves, without a doubt, why Dean has earned the title (and crown), Queen of HiNRG. The singer knows what her loyal fanbase wants and expects from their HiNRG highness. If anything, this double single whets the appetite for the new year, but we’ll be wanting more new music in the future. “All hail, Hazell Dean!”

Heavenly/Because the Night is available for preorder digitally and at EnergiseRecords.com. For more information on Hazell, her music, and upcoming events, go to hazelldean.net.